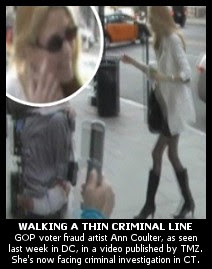 New allegations of absentee ballot fraud in '02 and '04 follow on her multiple voter fraud crimes in FL in '05, for which she was never 'cleared,' as some media have inaccurately reported...

An official state investigation is now underway into multiple voter fraud charges against Rightwing author and one-time attorney Ann Coulter in Connecticut. The investigation began after a complaint was filed with the state's Elections Enforcement Commission on January 29, 2009.

The BRAD BLOG has exclusively obtained a copy of that one-page complaint which is posted in full, as filed with Joan M. Andrews, Director of Legal Affairs and Enforcement for the commission, at the end of this article.

The complaint was filed by Daniel Borchers, a conservative Christian critic of Coulter's following allegations in the New York Daily News in January that she had illegally voted by absentee ballot in CT, using her parents address there, in 2002 and 2004, despite being a resident of New York City at the time.

Previously allegations by Borchers against Coulter have been the subject of a number of articles over the years here at The BRAD BLOG, and he has, on occasion, even guest blogged a number of times here for us himself.

Though the allegations of Coulter having committed voter fraud in CT in 2002 and 2004 would be her first known instances of casting ballots illegally, they are not the first allegations of such crimes against Coulter. In 2005, after she moved from NY to Palm Beach, FL, she knowingly falsified her Voter Registration Form (a 3rd degree felony), knowingly voted at the wrong precinct (a 1st degree misdemeanor), as well as gave a false address for her drivers license (another 3rd degree felony).

Despite an inaccurate report from AP in May of 2007, subsequently picked up by other media, Coulter was never "cleared" of the voter fraud charges in FL.

The BRAD BLOG has posted indisputable evidence of her FL crimes, including her actual fraudulent Voter Registration Form on which she lied when filling out her own address, official testimony from a Palm Beach pollworker (and the county's former Supervisor of Elections) detailing her knowingly having voted in the wrong precinct, as well as a report from the Palm Beach Township Chief of Police, verifying the crimes.

Coulter, however, was able to escape accountability for the illegalities in FL, due to an inappropriate (and likely illegal) intervention from a former boyfriend of hers in the FBI, and gaming of the legal system, such that the crimes were eventually nullified by the statute of limitations there.

The most recent complaint from Borchers follows articles by the New York Daily News and Lee Stranahan at Huffington Post last month, detailing her apparently-illegal CT absentee voting. But it would not be the first time he would play a roll in this continuing saga..............

Posted by kmmcshea@gmail.com at 9:49 PM