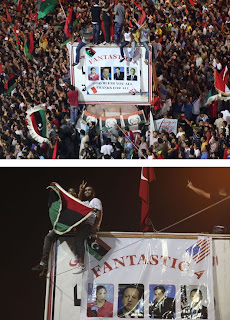 Republican presidential hopefuls have been offering their reactions to the fall of Qaddafi’s regime, giving praise for many involved save for — perhaps predictably — President Obama, who many of them attacked for endorsing the NATO intervention earlier this year.

Rick Santorum: “Ridding the world of the likes of Gadhafi is a good thing, but this indecisive President had little to do with this triumph.”

It’s hard to see how that statement bears any resemblance to reality, considering that many in Santorum’s own party attacked Obama for doing too much in Libya. In fact, Santorum himself accused Obama of “dithering” and”do[ing] nothing” in Libya in April, saying Obama “really missed an opportunity.”

Mitt Romney: “The world is about to be rid of Muammar el-Qaddafi, the brutal tyrant who terrorized the Libyan people. It is my hope that Libya will now move toward a representative form of government that supports freedom, human rights, and the rule of law. As a first step, I call on this new government to arrest and extradite the mastermind behind the bombing of Pan Am 103, Abdelbaset Mohmed Ali al-Megrahi, so justice can finally be done.”

In March, Romney accused Obama of being “weak” with the Libya intervention, suggesting Obama’s foreign policy “can’t prevail.” “He calls for the removal of Moammar Qaddafi but then conditions our action on the directions we get from the Arab League and United Nations,” Romney added. In a blog post for National Review in April, Romney warned of “mission creep” and approvingly quoted former U.N. ambassador John Bolton, who Romney said “rightly notes that Obama has set himself up for ‘massive strategic failure’ by demanding Qaddafi’s ouster.” Of course, Obama’s approach did “prevail.”

Rick Perry: “The crumbling of Muammar Ghadafi’s reign, a violent, repressive dictatorship with a history of terrorism, is cause for cautious celebration. The lasting impact of events in Libya will depend on ensuring rebel factions form a unified, civil government that guarantees personal freedoms, and builds a new relationship with the West where we are allies instead of adversaries.”

Perry didn’t speak publicly about the Libya intervention specifically, but has repeatedly attacked Obama’s foreign policy, saying in his presidential campaign announcement, “[Obama] is an abject failure in his constitutional duty” to protect America. “His foreign policy seems to be based on the alienation of traditional allies,” Perry added. Of course, it was the traditional American allies of the U.K. and France with whom U.S. primarily conducted the Libya intervention.

Much as with the killing of Bin Laden, the GOP candidates seem to be unwilling to give even a modicum of congratulations to their political opponent, even on a matter of national security that seemingly every politician in the U.S. should support. Instead, Romney and others are already pivoting to demanding the extradition of the Lockerbee bomber, which would appear to be a means to put Obama back on the defensive when he should riding high, even it means threatening Libya’s fragile transitional regime with outside pressure.

Michele Bachmann weighed in, also refusing to credit the administration or NATO: “I opposed U.S. military involvement in Libya and I am hopeful that our intervention there is about to end. I also hope the progress of events in Libya will ultimately lead to a government that honors the rule of law, respects the people of Libya and their yearning for freedom, and one that will be a good partner to the United States and the international community.”