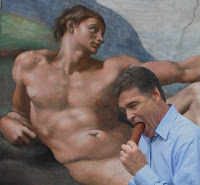 Oh gawd, the Christian Right just gets weirder and more insane every time we read news, which would actually not be news except for the fact that gay wax sculpture Rick Perry has tuned into these weirdos who claim that Jesus or whoever is in charge of heaven’s email spam system forwarded these remarkably insane people a prophesy identifying Perry as their next king. From a sad/horrifying story in the Texas Observer, go read the whole thing if you are one of those “creepy bedtime stories” people:

[The New Apostolic Reformation movement's] beliefs can tend toward the bizarre. Some consider Freemasonry a “demonic stronghold” tantamount to witchcraft. The Democratic Party, one prominent member believes, is controlled by Jezebel and three lesser demons. Some prophets even claim to have seen demons at public meetings. They’ve taken biblical literalism to an extreme. In Texas, they engage in elaborate ceremonies involving branding irons, plumb lines and stakes inscribed with biblical passages driven into the earth of every Texas county.

If they simply professed unusual beliefs, movement leaders wouldn’t be remarkable. But what makes the New Apostolic Reformation movement so potent is its growing fascination with infiltrating politics and government. The new prophets and apostles believe Christians—certain Christians—are destined to not just take “dominion” over government, but stealthily climb to the commanding heights of what they term the “Seven Mountains” of society, including the media and the arts and entertainment world. They believe they’re intended to lord over it all. As a first step, they’re leading an “army of God” to commandeer civilian government.

In Rick Perry, they may have found their vessel. And the interest appears to be mutual.