Nearly 10 Years Ago Today, The U.S. Began Borrowing Billions To Pay For The Bush Tax Cuts

As debates about deficit reduction continued to be heavily tilted toward cutting spending, which threatens to undermine a fragile recovery, rather than raising revenue from those who can afford it, it’s important to remember the budgetary impact of the Bush tax cuts.

Nearly 10 years ago today, on August 1, 2001, the Associated Press reported that the Treasury Department was tapping $51 billion of credit in order to pay for the budgetary cost of the first round of Bush tax cuts’ rebate checks. The AP reported at the time that Democratic Party opponents of the tax cuts worried that they’d return government budgets to “red ink“: 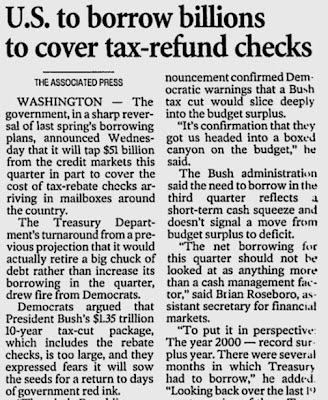 The opponents of the tax cut turned out to be right. The 2001 and 2003 tax cuts combined have blown a $2.5 trillion hole in America’s budget and created deficits stretching on for years.
Posted by TOTAL KAOS at 2:12 PM