Last week, California State Sen. Leland Yee (D) called on right-wing hate radio host Rush Limbaugh to apologize for mocking Chinese President Hu Jintao and the Chinese language by speaking gibberish “ching chong chang” Chinese on his radio program. Yee, who is Chinese-American and chairs the state Senate Select Committee on Asian and Pacific Islander Affairs, said Limbaugh owes the Chinese-American community an apology for his “pointless and ugly offense.” Naturally, Limbaugh did not apologize, and instead railed against Yee the following day on his radio, calling him out repeatedly by name.

Yee’s call for civility did not sit well with one Limbaugh fan, who responded by sending several racist death threats to Yee’s office this week. “Rush Limbaugh will kick your chink ass and expose you for the fool you are,” the faxes read, threatening him with “death” (warning, contains racial expletives): 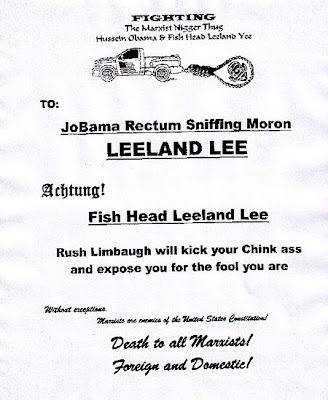 As the San Francisco Chronicle notes, “The faxes include a drawing of a U.S. flag-adorned pickup truck towing a noose that is looped around what appears to be a caricature head of President Barack Obama.”

The state Senate sergeant-at-arms and the California state police are investigating the threats. And yesterday, Yee called for an advertising boycott of Limbaugh’s show.

The faxes contained “similar graphics and language” as faxes Yee received in April, after he sought to expose how much former Alaska Gov. Sarah Palin (R) was being paid to speak at a state university and whether tax-payer dollars were being used to pay her fee.