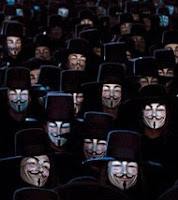 Online protest group "Anonymous," which has in recent months staged some of the most stunning and audacious cyber-attacks yet seen on key corporate Internet infrastructure, has named Saturday, Jan. 15, as a global day of protest to defend the freedom of speech.

In a video published to their central communications blog, "AnonOps Communications" sought to rally others who supported their actions against corporations that censored or otherwise impeded secrets outlet WikiLeaks.

"Stand up and fight," an online video pleaded. "Every city, everywhere."

It featured youthful protesters wearing the mask of Guy Fawkes, a British terrorist who led the gunpowder plot in 1605, which sought to blow up the king and members of parliament. He was revealed, however, and sentenced to death: later to be popularized by graphic novelist Alan Moore in his "V for Vendetta" series, created as a reaction to Britain's rightward political surge under Margaret Thatcher. Fawkes was again popularized in 2006 by a Hollywood film of the same name, adapted to reflect upon the politics of the Bush administration.

The symbol of Fawkes was adopted by "Anonymous" when the group first formed to take on what they saw as the abuses of Scientology. In recent years, they had been labeled a potential terrorist threat by the US Department of Homeland Security, which mentioned "Anonymous" among a list of other groups they believed could fuel a "resurgence in radicalization."......................................