Selection of Palin is a Bizarre Choice 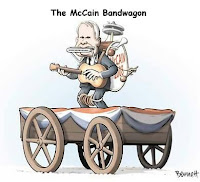 In Governor Sarah Palin McCain chooses a running mate with zero foreign policy experience and a brewing scandal which is being investigated by the Alaska state legislature. The contrast with Senator Joe Biden could not be starker and more unfavorable for the soon to be Republican nominee.

For a party which claims it is trying to reach out to the Jewish community McCain’s pick is particularly strange. Prior to today’s selection Palin apparently has never spoken publicly about Israel. Moreover, on a broad range of issues— most strikingly on the issue of women’s reproductive freedom— she is totally out of step with Jewish public opinion. The gulf between Palin’s public policy positions and the American Jewish community is best illustrated by the fact that the Christian Coalition of America was one of the strongest advocates of her selection......