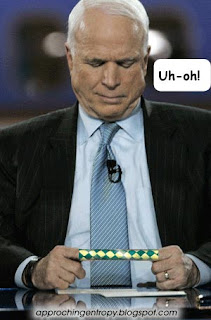 For years, John McCain's marathon bull sessions with reporters were more than a means of delivering a message; they were the message. McCain proudly, flagrantly refused direction from handlers, rarely dodged tough questions and considered those who did wimps and frauds.

The style told voters that he was unafraid, that he had nothing to hide and that what you see is what you get. "Anything you want to talk about," he promised reporters aboard the Straight Talk Express in Iowa back in March 2007.

"One of the fundamental principles of the bus is that there is no such thing as a dumb question."

When asked if he would keep the straight talk coming, McCain replied, "You think I could survive if I didn't? We'd never be forgiven ... I'd have to hire a food taster, somebody to start my car in the morning."

Even after he won the GOP nomination, he demanded that his new campaign plane be configured to include a sofa up front so he could re-create the Straight Talk Express at 30,000 ft.

Sticking to the old formula seemed like a good idea. But with the press focused on Obama, McCain got attention only when he slipped up during one of his patented freewheeling encounters with reporters.

And so in July, the campaign decided to clamp down on the candidate. Open-ended question time was reduced to almost nothing, and the famously unscripted McCain began heeding his talking points, even as his aides maintained he missed the old informality.

And so when TIME's James Carney and Michael Scherer were invited to the front of McCain's plane recently for an interview, they were ushered forward, past the curtain that now separates reporters from the candidate, past the sofa that was designed for his gabfests with the press and taken straight to the candidate's seat.

McCain at first seemed happy enough to do the interview. But his mood quickly soured. The McCain on display in the 24-minute interview was prickly, at times abrasive, and determined not to stray off message. An excerpt:

What do you want voters to know coming out of the Republican Convention — about you, about your candidacy?
I'm prepared to be President of the United States, and I'll put my country first.

There's a theme that recurs in your books and your speeches, both about putting country first but also about honor. I wonder if you could define honor for us?
Read it in my books.

I've read your books.
No, I'm not going to define it.

But honor in politics?
I defined it in five books. Read my books.

[Your] campaign today is more disciplined, more traditional, more aggressive. From your point of view, why the change?
I will do as much as we possibly can do to provide as much access to the press as possible.

But beyond the press, sir, just in terms of ...
I think we're running a fine campaign, and this is where we are.

Do you miss the old way of doing it?
I don't know what you're talking about.

Really? Come on, Senator.
I'll provide as much access as possible ...

In 2000, after the primaries, you went back to South Carolina to talk about what you felt was a mistake you had made on the Confederate flag. Is there anything so far about this campaign that you wish you could take back or you might revisit when it's over?
[Does not answer.]

Do I know you? [Says with a laugh.]
[Long pause.] I'm very happy with the way our campaign has been conducted, and I am very pleased and humbled to have the nomination of the Republican Party.

You do acknowledge there was a change in the campaign, in the way you had run the campaign?
[Shakes his head.]

You don't acknowledge that? O.K., when your aides came to you and you decided, having been attacked by Barack Obama, to run some of those ads, was there a debate?
The campaign responded as planned.

Jumping around a bit: in your books, you've talked about what it was like to go through the Keating Five experience, and you've been quoted as saying it was one of the worst experiences of your life. Someone else quoted you as saying it was even worse than being a POW ...
That's another one of those statements made 17 or 18 years ago which was out of the context of the conversation I was having. Of course the worst, the toughest experience of my life was being imprisoned, so people can pluck phrases from 17 or 18 years ago ...

How different are you from President Bush? Are you in step with your party? Are you independent from your party?
My record shows that I have put my country first and I follow the philosophy and traditions of Abraham Lincoln and Theodore Roosevelt and Ronald Reagan. Sometimes that is not in keeping with the present Administration or my colleagues, but I've always put my country first, whether it's saying I didn't support the decision to go to Lebanon or my fighting against the corruption in Washington or out-of-control pork-barrel spending, which has led to members of Congress residing in federal prison. So I've always stood up for a set of principles and a philosophy that I think have been pretty consistent over the years.

Your tougher line on Russia, which predated [the Russian invasion of Georgia], now to many looks prescient. Others say it's indicative of a belligerent approach to foreign policy that would perhaps further exacerbate the tensions being created with our allies and others around the world under the Bush Administration. How do you respond to that critique?
Well, it reminds me of some of the arguments we went through when Ronald Reagan became President of the United States. I think Russian behavior has been very clear, and I've pointed it out for quite a period of time, and the chronicle of their actions has been well known since President [Vladimir] Putin came to power, and I believe that it's very important that Russia behave in a manner befitting a very strong nation. They're not doing so at this time, so therefore I will criticize and in some cases — in the case of the aggression against Georgia — condemn them.

You were a very enthusiastic supporter of the invasion of Iraq and, in the early stages, of the Bush Administration's handling of the war. Are those judgments you'd like to revisit?
Well, my record is clear. I believe that the world is better off without Saddam Hussein. I believe it's clear that he had every intention to acquire and use weapons of mass destruction. I can only imagine what Saddam Hussein would be doing with the wealth he would acquire with oil at $110 and $120 a barrel. I was one of the first to point out the failure of strategy in Iraq under [former Defense Secretary Donald] Rumsfeld. I was criticized for being disloyal to the Republicans and the President. I was the first to say I would lose a campaign rather than lose a war. I supported the surge. No observer over the last two years would say the surge hasn't succeeded. I believe we did the right thing.

A lot of people know about your service from your books, but most people don't know that you have two sons currently in the military. Can you describe what it means to have Jack and Jimmy in uniform?
We don't discuss our sons.