Do The Facts Support John McCain? 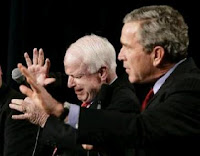 NOTE: The election is fast approaching, yet an astounding number of people aren't aware of some critically important facts. Hopefully this email can change some of that, if we share it with enough people. I ask that you don't assume that just because you may know these facts that most potential voters do. BTW, I'm going phone banking tonight so I believe that we need to do EVERYTHING we can to win, and that includes getting this information into millions of homes via email!

1)-If you make less than $112,000 a year as an individual (not household income, individual income) you will pay a lot less in income taxes under Obama's proposed tax plan than under McCain's. You make up part of the 80% of Americans in this category.

2)-If you get your health insurance through your employer John McCain wants to treat your benefit as taxable income. That will push many Americans into a higher income bracket meaning you could pay thousands per year more in taxes.

3)-If you think corporations don't pay enough taxes you aren't alone. According to the non-partisan GAO about 2/3 of US Corporations paid no taxes at some point between 1998-2005. Despite this John McCain wants to cut the corporate tax rate by a whopping 10% in addition to increased first year write-offs which will ultimately cost us about 1.3 trillion dollars.

4)-If you think oil companies aren't paying their fair share, you aren't alone. Exxon Mobil just recorded the highest profit for any corporation in history (again). Despite this fact John McCain wants to slash their taxes by 10% and not take back the 14 billion dollars in tax payer subsidies that the Republicans in Congress fought to give oil companies.

5)-If you think Republicans are not fiscally responsible you aren't alone. Over 70% of our National Debt was created by just 3 Republican Presidents. Republican Ronald Reagan borrowed more money than all presidents before him, from George Washington to Jimmy Carter, combined. Now George Bush may borrow even more more than Reagan. Democratic president Bill Clinton is the only president in the last 30 years to not only not create any debt, but to finish with a budget surplus.

6)-If you think borrowing trillions of dollars from foreign countries to put on a Giant National Credit Card is a bad idea, you're not alone. We pay hundreds of billions of dollars in interest only payments on our debt each year, meaning our tax dollars are flushed down the toilet for things that no longer benefit us, assuming they ever did. Higher debt means our money is worth less which makes gas, food and just about everything else more expensive. A conservative estimate is that the US dollar has lost over 27% of it's value since the year 2000.

8)-If you think focusing on which (current and former) candidates wear a flag pin is a waste of time that distracts us from real issues, you're not alone. After all, why should it bother you that Hillary Clinton and John McCain don't wear a flag pin?

9)-Some people say you can judge someone based on the company they keep. That's interesting, because John McCain went out of his way to get the endorsement of Reverend Hagee. Most people have never heard of Hagee, possibly because according to a non-partisan study, while the media has in fact spent more talking about Obama (than McCain) most of that time has been spent saying negative things about him.

How else could you explain that fact that so few people know that McCain's Reverend Hagee referred to the Catholic Church as "the great whore" or that he believes and is on tape having said that "Hitler Was Fulfilling God's Will For Israel"? And that's in addition to the inflammatory comments he's made regarding many other groups including women.

Also, McCain aids, advisers and fundraisers have made about $1 billion from corporate sponsors. I guess that explains why McCain's policies mostly benefit the richest and most powerful among us?

10)-Finally, many people believe you can judge a man by how he treats his family, and adultery is incredibly serious to people (and of course it's the topic of The 7th Commandment). Some people are aware that John McCain cheated on his first wife Carol with his current wife Cindy (who was 18 years younger and quite wealthy), but they aren't aware that John's wife Carol was in a horrible, disfiguring car accident shortly before the affair began.


In light of all of this information you have to ask yourself: If the facts don't support John McCain, why should you?
Posted by TOTAL KAOS at 2:42 PM