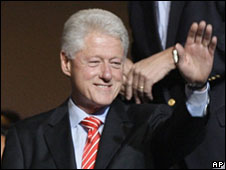 Former President Bill Clinton has given his firm backing to Democratic presidential nominee Barack Obama, saying he "is the man for this job".

He said he was proud of his wife, Hillary, for her campaign but that her supporters should now support Mr Obama.

Earlier, Mr Obama was formally named as Democratic candidate for the White House, the first African-American to be nominated by a major US party.

Mrs Clinton called for his nomination by voice vote, in a gesture of unity.

She said: "Let's declare together in one voice, right here, right now, that Barack Obama is our candidate."

Mr Clinton was given an enthusiastic welcome by delegates to the Democratic convention in Denver, watched by his wife and their daughter, Chelsea.

His address will be followed by that of Joe Biden, Mr Obama's running-mate.

Mr Obama has arrived in Denver, where the Democratic convention is taking place, but is not due to speak until Thursday.

His confirmation by acclamation as the party's presidential candidate, greeted by loud cheers from the convention floor, represents a historic first.

Mr Obama will stand against Republican John McCain in the 4 November presidential election.

The nomination itself was a mix of formality and tension, says the BBC's Kevin Connolly in Denver.

The Obama camp had hoped to avoid a state-by-state rundown based on the primary election results, which would have revealed how narrow his victory over Mrs Clinton was, our correspondent says.

After a few days of behind-the-scene discussions, Mrs Clinton agreed to release her delegates - supporters won by her during the primaries - freeing them to take part in a display of party unity.

"This has been a joy. We didn't make it, but boy did we have a good time trying," Mrs Clinton said in a speech to about 3,000 people ahead of the roll call.

Many in the crowd shouted back "No!" as she released them, but Mrs Clinton urged them to put the party first.

"We will leave Denver united," she said. "My goal is that we win in November."

The roll call for the nomination - in which each state, in alphabetical order, declares how many votes were cast for each candidate in the primaries - included Mrs Clinton's name in a bid to placate her disappointed supporters.

Wednesday's addresses are expected to focus on foreign policy and security.

Some observers say the topics have been weak points of Senator Obama's campaign so far.

Senator Biden, 65, is a veteran foreign policy expert who was chosen as vice-presidential candidate by 47-year-old Mr Obama partly on account of his experience.

Mr Obama will headline Thursday's convention speeches, having spent the first part of the week campaigning in battleground states, and will formally accept the party's nomination then.
Posted by TOTAL KAOS at 6:39 PM