Congressional Republicans — during both last year’s debate over the pending expiration of the Bush tax cuts and the current negotiations regarding raising the nation’s debt ceiling — refused to consider tax increases on even the very richest Americans. In fact, House Majority Leader Eric Cantor (R-VA) blew up debt ceiling negotiations last week due to his insistence that those making more than $500,000 annually be shielded from any tax increase.

The GOP justification for its position — even with income inequality at its worst level since the 1920s — is that raising taxes on the rich will destroy jobs. “What some are suggesting is that we take this money from people who would invest in our economy and create jobs and give it to the government. The fact is you can’t tax the very people that we expect to invest in the economy and create jobs,” said Speaker of the House John Boehner (R-OH).

However, history doesn’t back up the GOP’s claim. In fact, as Center for American Progress Director of Tax and Budget Policy Michael Linden found, “in the past 60 years, job growth has actually been greater in years when the top income tax rate was much higher than it is now”:

And there’s no cherry-picking here. Pick any threshold. When the marginal tax rate was 50 percent or above, annual employment growth averaged 2.3 percent, and when the rate was under 50, growth was half that. 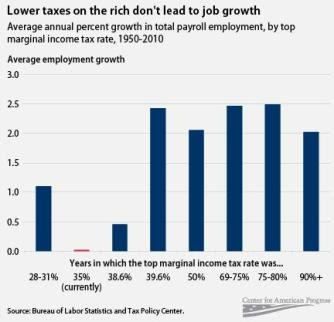