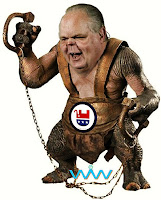 Looks like Republicans aren’t going to stick by Rush Limbaugh this time.

Despite the dangers they’ve faced in the past when criticizing the giant of conservative talk radio, high-profile Republicans are going on the record disavowing Limbaugh’s attack on a Georgetown law student — some are even demanding he apologizing.

Sen. Scott Brown (R-MA), locked in a tough reelection battle with Elizabeth Warren, offered up one of the starkest condemnations of Limbaugh’s repeated attacks on Sandra Fluke, who he has called “a slut” and publicly degraded on air this week.

Other Republicans are criticizing Limbaugh without going quite as far as Brown. Speaker John Boehner’s office called out both Limbaugh as well as the progressive and Democratic groups rallying their supporters with Limbaugh’s words.

“The speaker obviously believes the use of those words was inappropriate,” Boehner spokesperson Michael Steel told CNN, “as is trying to raise money off the situation.”

Rick Santorum also criticized Limbaugh on CNN but didn’t call for an apology.

“He’s being absurd, but that’s you know, an entertainer can be absurd,” Santorum said. “He’s in a very different business than I am.”

Mitt Romney distanced himself from the language at an Ohio rally on Friday night, but also refrained from criticizing Limbaugh directly.

“It’s not the language I would have used,” he said.

Other Republicans who jumped on the bandwagon Friday:

• NRSC Vice Chairwoman Carly Fiorina told CBS that Limbaugh comments about Fluke were “insulting in my opinion.” She added that Limbaugh was serving as “a distraction from what are very real and important issues.”

• House Oversight Committee Chairman Darrell Issa, who made Fluke famous by refusing to let her testify on a panel about contraception access last month, also said Limbaugh is a distraction. His was perhaps the least condemning criticism of all the Republicans who weighed in Friday. In a long letter, Issa attacked Democrats for using Limbaugh for political gain and claimed his own female staffers have fallen victim to insulting language from callers to Issa’s office opposed to GOP plans to limit access to contraception insurance coverage to workplaces where employers support the concept.

Issa wrote that he does not agree “with many comments that have been made during the effort to examine the constitutionality of Obamacare’s mandates on individual freedom, including the ones by Mr. Limbaugh, I find your narrow focus on this particular comment to be self-serving and dismissive of other inappropriate comments and attacks on Americans of faith.”
Posted by kmmcshea@gmail.com at 7:42 PM