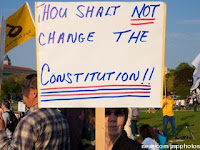 Earlier this week, we looked at many of the various (and popular) long-existing laws that tea parters and their leaders think are actually unconstitutional. They run the gamut from Social Security to civil rights to abolition of the Department of Education and on and on.

But despite all the talk about "returning" to the Constitution, don't confuse tea partiers with Constitutional purists, who happen to read the document in a conservative way. True, about half of the changes they want to make to the social fabric result from a peculiar interpretation of the Constitution as it exists. The other half, though, would actually require Congress and the states to change it altogether.

Here's how tea party candidates and organizers would amend the Constitution.

Things get heated during campaign season. Whether by head stomp, citizens arrest of a journalist, swastikas or punches to the face, partisans try to silence their rivals. But this campaign season -- practically the entire month of August, in fact -- the right flank of the Republican party and their tea party faithful took direct aim at the so-called "Ground Zero Mosque" in lower Manhattan. Almost all Republicans opposed its construction. Most of them urged the developers to abandon the project of their own volition. But others, led by Newt Gingrich, and far-right activist Pamela Geller, wanted the government to directly intercede to prevent the construction of a house of worship. First, though, you'd have to change that part of the Constitution that reads "Congress shall make no law respecting an establishment of religion, or prohibiting the free exercise thereof."

It might seem a little out there... but then the Department of Justice recently had to file an amicus brief declaring that Islam is recognized as a religion following efforts by some conservatives to claim that it isn't in order to get around this amendment.

The pressure on elected Republicans from tea partiers to curb illegal immigration is so strong that Republican members of Congress -- including one supposed moderate -- briefly considered amending the Constitution to change or eliminate what's known as "birthright citizenship." It started with Sen. Lindsey Graham (R-SC) who considered a constitutional amendment, and Sen. Jon Kyl (R-AZ), who suggested the amendment process start with congressional hearings.

In all, the birthright citizenship craze spread through a broad swath of the right and the GOP.

This strikes the core of the tea party's libertarian heart. The 16th amendment provides Congress the power "to lay and collect taxes on incomes, from whatever source derived, without apportionment among the several States, and without regard to any census or enumeration." All those Republicans -- including Kentucky Senate candidate Rand Paul -- who envision a world where the income tax is replaced by a national sales tax would really like to see the 16th Amendment repealed. Georgetown Law professor Randy Barnett described that as a "simple solution."

Republican congressional hopefuls got themselves in trouble during primary season when several of them were revealed to have supported the idea of repealing the 17th Amendment. That's the one that provides for direct election of Senators. The thinking among states-rights oriented tea partiers is that states had more power over Washington when senators were picked by state legislatures, and not by popular vote. But this phenomenon seems to reappear every time the right is out of power -- and the Senate would become more conservative if direct election were scrapped. There's no indication that a Congress controlled by Republicans would pursue an amendment like this, but if they do, conservative Rep. Louie Gohmert (R-TX) already has one drafted.

This one's a bit out of left right field and there's little indication that a significant subset of the tea party really cares about or supports this. But check out what Nevada Senate Republican hopeful Sharron Angle told Liberty Watch: "I feel the same about legalizing alcohol," she said. "The effect on society is so great that I'm just not a real proponent of legalizing any drug or encouraging any drug abuse."

The 21st Amendment repealed the 18th Amendment, which instituted prohibition. Just repeal the 21st Amendment and -- voila! -- the 18th is back in effect. Not sure that'd be great for Nevada's struggling, booze-and-gambling-centric economy, tough.

Posted by kmmcshea@gmail.com at 9:25 AM