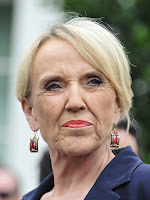 In a brief order, the justices brushed aside arguments by Lisa Hauser, the governor's attorney, that Brewer's decision was not subject to court review.

More to the point, they said that Brewer's power to oust a commissioner is limited to situations of substantial neglect of duty or gross misconduct. The justices said that nothing the governor alleged that Mathis did rises to that level.

But the governor will have to act quickly. The order frees Mathis to resume her duties -- and, presumably, to cast the deciding vote on the five-member panel to adopt new congressional and legislative maps.

Posted by kmmcshea@gmail.com at 10:38 PM