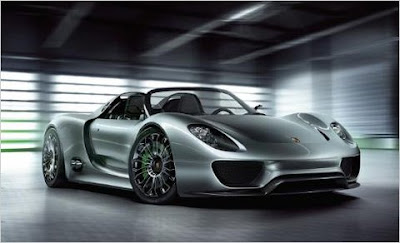 Citing an “overwhelming response from the public and customers,” Porsche said on Wednesday that it intended to move its ultrapowerful and gorgeously styled 918 Spyder plug-in hybrid from concept to production model. The decision complements a second, more modest environmentally themed test program announced on Monday that will put three battery-operated versions of the popular Boxster into what the company calls “field tests.”

Gary Fong, a Porsche spokesman, cautioned that the 918 decision doesn’t guarantee that the car will actually be built, just that a production-intent program will go forward. In any case, it will be a true exotic. According to Bloomberg, citing “people familiar with the matter,” the 918 could be priced at an incredible $640,000. But Mr. Fong called that number “pure speculation.”

The 918 Spyder was shown at the 2010 Geneva auto show and at Auto China in Beijing. Porsche said that its combined a 500-horsepower V-8 and twin electric motors producing 160 kilowatts, for a combined 718 horsepower. All of the numbers for the Spyder are big, including a 198 mile per hour top speed and a zero-to-60 time of 3.2 seconds. It will also reportedly achieve 78 miles per gallon, though obviously not with that huge V-8 at full throttle..................

Posted by kmmcshea@gmail.com at 10:23 PM