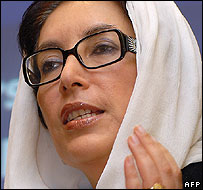 Benazir Bhutto followed her father into politics, and both of them died because of it - he was executed in 1979, she fell victim to an apparent suicide bomb attack.

Like the Nehru-Gandhi family in India, the Bhuttos of Pakistan are one of the world's most famous political dynasties. Benazir's father, Zulfikar Ali Bhutto, was prime minister of Pakistan in the early 1970s.

His government was one of the few in the 30 years following independence that was not run by the army.

Born in 1953 in the province of Sindh and educated at Harvard and Oxford, Ms Bhutto gained credibility from her father's high profile, even though she was a reluctant convert to politics.

On both occasions she was dismissed from office by the president for alleged corruption.

The dismissals typified her volatile political career, which was characterised by numerous peaks and troughs. At the height of her popularity - shortly after her first election - she was one of the most high-profile women leaders in the world.

Young and glamorous, she successfully portrayed herself as a refreshing contrast to the overwhelmingly male-dominated political establishment.

But after her second fall from power, her name came to be seen by some as synonymous with corruption and bad governance.

The determination and stubbornness for which Ms Bhutto was renowned was first seen after her father was imprisoned and charged with murder by Gen Zia ul-Haq in 1977, following a military coup. Two years later he was executed.

Ms Bhutto was imprisoned just before her father's death and spent most of her five-year jail term in solitary confinement. She described the conditions as extremely hard.

During stints out of prison for medical treatment, Ms Bhutto set up a Pakistan People's Party office in London, and began a campaign against General Zia.

She returned to Pakistan in 1986, attracting huge crowds to political rallies.

After Gen Zia died in an explosion on board his aircraft in 1988, she became one of the first democratically elected female prime ministers in an Islamic country.

During both her stints in power, the role of Ms Bhutto's husband, Asif Zardari, proved highly controversial.

He played a prominent role in both her administrations, and has been accused by various Pakistani governments of stealing millions of dollars from state coffers - charges he denies, as did Ms Bhutto herself.

Many commentators argued that the downfall of Ms Bhutto's government was accelerated by the alleged greed of her husband.

None of about 18 corruption and criminal cases against Mr Zardari has been proved in court after 10 years. But he served at least eight years in jail.

He was freed on bail in 2004, amid accusations that the charges against him were weak and going nowhere.

Ms Bhutto also steadfastly denied all the corruption charges against her, which she said were politically motivated.

She faced corruption charges in at least five cases, all without a conviction, until amnestied in October 2007.

She was convicted in 1999 for failing to appear in court, but the Supreme Court later overturned that judgement.

Soon after the conviction, audiotapes of conversations between the judge and some top aides of then Prime Minister Nawaz Sharif were discovered that showed that the judge had been under pressure to convict.

Ms Bhutto left Pakistan in 1999 to live abroad, but questions about her and her husband's wealth continued to dog her.

She appealed against a conviction in the Swiss courts for money-laundering.

During her years outside Pakistan, Ms Bhutto lived with her three children in Dubai, where she was joined by her husband after he was freed in 2004.

She was a regular visitor to Western capitals, delivering lectures at universities and think-tanks and meeting government officials.

Ms Bhutto returned to Pakistan on 18 October 2007 after President Musharraf signed into law an ordinance granting her and others an amnesty from corruption charges.

Observers said the military regime saw her as a natural ally in its efforts to isolate religious forces and their surrogate militants.

She declined a government offer to let her party head the national government after the 2002 elections, in which the party received the largest number of votes.

In the months before her death, she had emerged again as a strong contender for power.

Some in Pakistan believe her secret talks with the military regime amounted to betrayal of democratic forces as these talks shored up President Musharraf's grip on the country.

Others said such talks indicated that the military might at long last be getting over its decades-old mistrust of Ms Bhutto and her party, and interpreted it as a good omen for democracy.

Western powers saw in her a popular leader with liberal leanings who could bring much needed legitimacy to Mr Musharraf's role in the "war against terror".

Benazir Bhutto was the last remaining bearer of her late father's political legacy.

Her brother, Murtaza - who was once expected to play the role of party leader - fled to the then-communist Afghanistan after his father's fall.

From there, and various Middle Eastern capitals, he mounted a campaign against Pakistan's military government with a militant group called al-Zulfikar.

He won elections from exile in 1993 and became a provincial legislator, returning home soon afterwards, only to be shot dead under mysterious circumstances in 1996.

Benazir's other brother, Shahnawaz - also politically active but in less violent ways than Murtaza - was found dead in his French Riviera apartment in 1985.
Posted by TOTAL KAOS at 12:42 PM

Few news outlets have pointed out this bit of irony I reported earlier today at Bob McCarty Writes™:

The Pakistan People's Party, under the leadership of former Prime Minister Benazir Bhutto, used a news release yesterday to announce it had turned to the Internet to raise funds for the party's efforts to win parliamentary elections in January 2008.