Yet Another Photo of Site in Syria, Yet More Questions 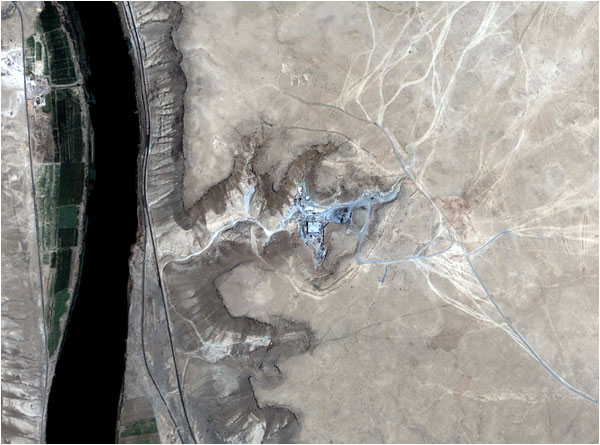 The mystery surrounding the construction of what might have been a nuclear reactor in Syria deepened yesterday, when a company released a satellite photo showing that the main building was well under way in September 2003 — four years before Israeli jets bombed it.

The long genesis is likely to raise questions about whether the Bush administration overlooked a nascent atomic threat in Syria while planning and executing a war in Iraq, which was later found to have no active nuclear program.

A senior American intelligence official said yesterday that American analysts had looked carefully at the site from its early days, but were unsure then whether it posed a nuclear threat.

In the time before the Iraq war, President Bush and his senior advisers sounded many alarms about Baghdad’s reconstituting its nuclear program. But they have never publicly discussed what many analysts say appears to have been a long-running nuclear effort next door.

Yesterday independent analysts, examining the latest satellite image, suggested that work on the site might have begun around 2001, and the senior intelligence official agreed with that analysis. That early date is potentially significant in terms of North Korea’s suspected aid to Syria, suggesting that North Korea could have begun its assistance in the late 1990s.

A dispute has broken out between conservatives and Secretary of State Condoleezza Rice over the administration’s pursuit of diplomacy with North Korea in the face of intelligence that North Korea might have helped Syria design a nuclear reactor.

The new image may give ammunition to those in the administration, including Ms. Rice, who call for diplomacy. If North Korea started its Syrian aid long ago, the officials could argue that the assistance was historical, not current, and that diplomacy should move ahead.

The progress of the site in late 2003 also raises new questions about a disagreement at the time between intelligence analysts and John R. Bolton, then the State Department’s top arms control official.

In the summer of 2003, Mr. Bolton’s testimony on Capitol Hill was delayed after a dispute erupted in part over whether Syria was actively pursuing a nuclear weapon. Some intelligence officials said Mr. Bolton overstated the Syrian threat.

“There was disagreement about what Syria was interested in and how much we should be monitoring it,” Mr. Bolton said in an interview yesterday. “There was activity in Syria that I felt was evidence that they were trying to develop a nuclear program.”

Mr. Bolton declined to say whether he had knowledge at the time about the site that the Israelis struck in September.

Spokesmen for the Central Intelligence Agency and the National Security Council declined to comment.

The new image of the desolate Syrian site was released yesterday by GeoEye, in Dulles, Va. Mark Brender, the company’s vice president for communications and marketing, said the picture was taken on Sept. 16, 2003. He added that the image had been collected as part of the company’s agenda of building a large archive of global images.

Earlier this week, federal and private analysts identified the precise location of the Syrian site, and since then rival companies have raced to release images. The site is on the eastern bank of the Euphrates, 90 miles north of the Iraqi border.

Images taken in August, before the Israeli raid, show a tall building about 150 feet wide on each side that analysts suspect might have sheltered a half-built nuclear reactor. Also visible is a pumping station on the Euphrates, which may be significant because reactors need water for cooling.

John E. Pike, director of GlobalSecurity.org, a private group in Alexandria, Va., that analyzes satellite images, said the 2003 picture showed the tall building in the midst of early construction, surrounded by churned earth. He put the groundbreaking in 2001.

“It’s uncommon to see such activity in the middle of nowhere,” he said, adding that it was sufficiently unusual to have worried American intelligence officials. “I’d have put it on my suspect site list and kept watching,” he said.

The senior intelligence official said that American spy satellites and analysts had, in fact, watched the site for years.

“It was noticed, without knowing what it was,” the official said. “You revisit every so often, but it was not a high priority. You see things that raise the flag and you know you have to keep looking. It was a case of watching it evolve.”

Jeffrey Lewis, an expert on nuclear proliferation at the New America Foundation in Washington, said it was surprising from the photos how little progress had been made at the site between 2003 and 2007.

But Mr. Lewis said it was ironic that Syria might have been trying to build a nuclear program just as the United States was invading Iraq in the fear that Iraq was developing nuclear arms.