O'Donnell In '07: Scientists Have Created Mice With Human Brains! 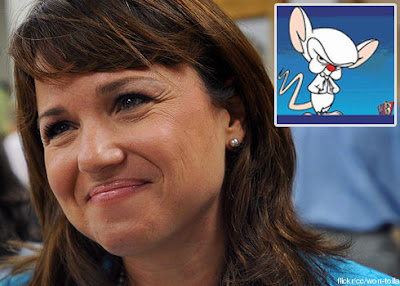 Delaware Republican Senate nominee Christine O'Donnell has previously sounded the alarm against cloning and stem-cell research -- and what she's described as the current terror of human-mouse hybrids.

We previously noted that O'Donnell had attacked her primary opponent, Congressman Mike Castle, based on his support for stem-cell research. But it turns out that her interest in the subject goes back much further. As Little Green Footballs has spotted, O'Donnell appeared in 2007 on The O'Reilly Factor, to speak out against such research in response to the cloning of some monkeys. Then came her warning on human-mouse hybrids.

"They are -- they are doing that here in the United States. American scientific companies are cross-breeding humans and animals and coming up with mice with fully functioning human brains. So they're already into this experiment."

It's possible that O'Donnell was misremembering this 2005 report on scientists who successfully grew human brain cells within mice -- which is not the same as an actual functioning human brain, but a demonstration that human brain cells can be made from stem cells.