Today, President Obama addressed the Veterans of Foreign Wars in Phoenix, AZ. In his speech, Obama reassured veterans about his health care plan: “One thing that reform won’t change is veterans health care. No one is going to take away your benefits.” Still, many veterans are reportedly wary of health reform. But ironically, one of the key pillars of reform — a public plan — is currently benefiting millions of veterans who rely on the government-provided care of the Veterans Health Administration.

The VA “outpaces other systems in delivering patient care,” consistently delivering higher quality health care more efficiently. A recent study by the RAND corporation found that “VA patients were more likely to receive recommended care” and “received consistently better care across the board, including screening, diagnosis, treatment and follow up”: 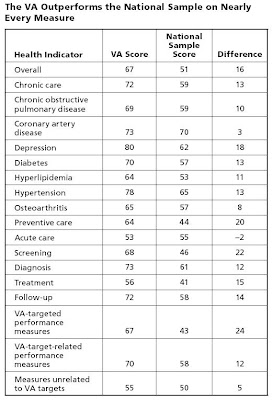 The study also concludes that “if other health care providers followed the VA’s lead, it would be a major step toward improving the quality of care across the U.S. health care system.” The public option — a frequent target of critics who argue that government health care would ration care or provide subprime coverage — would push health providers to adopt some of the VA’s delivery system reforms.

A public health insurance option is not a threat to Americans with private health insurance coverage; it’s an important component of the nation’s public-private health infrastructure. In 2008, federal, state and local governments contributed 47 percent of health care spending and if the VA system is any indication, then rather than intruding between the patient and the doctor or rationing care, federal dollars have only improved access and enhanced the delivery of care.