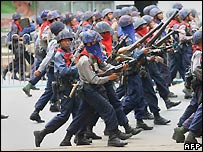 Burma's security forces have sealed off the five main monasteries in Rangoon and declared them no-go areas to prevent anti-government protests.

A small crowd assembled in the city's centre but was dispersed by soldiers without shots being fired, reports say.

Official media said nine people were killed on Thursday as troops fired tear gas and bullets to clear protesters off the streets of Rangoon, the main city.

There was again a heavy security presence in Rangoon on Friday, says the BBC's Chris Hogg in neighbouring Thailand.

Troops have sealed off the key monasteries and pagodas in Rangoon, including Shwedagon and Sule pagodas - the focal point for some of the larger protests earlier in the week.

Several hundred people ignored the official warnings and gathered in the centre of the city but were dispersed by soldiers and riot police.

No shots were fired and no arrests were made, Associated Press news agency said.

Loudspeaker trucks have been criss-crossing the city, warning people not to protect anyone fleeing arrest.

Burmese sources say internet access has been cut in Rangoon and is only partially available elsewhere.

Dissidents have been making use of the internet to get pictures and video of the protests and the bloody crackdown to international news outlets - who have then fed them back to Burma on the internet and satellite TV......
Posted by TOTAL KAOS at 2:01 AM