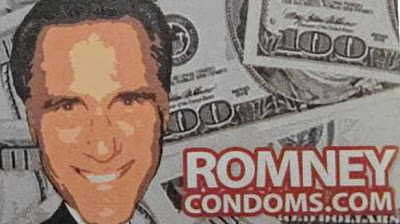 Republican presidential candidate Mitt Romney has inspired a New York-based condom company to create a prophylactic for “anyone with an elite penis.”

The product, sold on RomneyCondoms.com, features packaging with Romney’s likeness, the words “never settle” and a background of $100 bills. “Despite Mitt’s Inability To Stick To A Position, Romney Condoms Are Great For ANY Position,” the website boasts.

Say It With a Condom founder Benjamin Sherman told Raw Story that his company would be sending a box of the condoms to the Romney campaign because he believes it could be a way for the candidate to connect with the average American........................