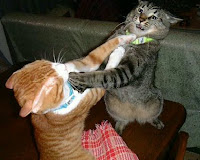 Fox Business News — their new hire John Stossel — weighing in with his own brand of myopic idiocy and no information whatsoever sat down with self-described rodeo clown Glenn Beck…what a self-important ass. … He doesn’t understand basic economics. … He’s just a silly little trick waiting to do some sort of Libertarian flip. [...]

Immigrants wrecking America — I’ve never said anything close to that. As a matter of fact, I embrace immigrants to this country, I welcome them, I want more — and as a matter of public policy, we need them. In no way am I restrictionist, and to hear this ass continue his act over at Fox News. I just can’t wait until he starts blowing bubbles in the air — that’s about all he’s equipped to do.

Besides accusing immigrants of bringing leprosy to the U.S. and promoting the “Aztlan” conspiracy theory that Mexicans are trying to reconquer part of the country, Dobbs has indeed embraced “restrictionist” arguments. In fact, he has called a high-skilled foreign worker visa program an “assault on middle class working men and women” and is quick to refer to anyone who advocates for sensible levels of legal immigration that match the nation’s economic needs “open border lobbyists.” Dobbs has gone so far as to suggest we can realistically deport all undocumented immigrants. Stossel indicated that he doesn’t subscribe to Dobbs’ views on immigration and draws the line at supporting conservatives like him.

Latino and pro-immigrant activists have launched two campaigns, Drop Dobbs and Basta Dobbs, which are aimed at pressuring CNN to “hold Mr. Dobbs to journalistic standards” or dump him altogether.