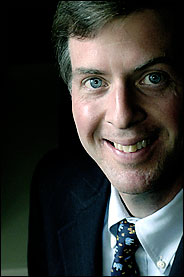 WASHINGTON (AP) ― A White House official who served as President Bush's middleman with conservatives and Christian groups handed in his resignation Friday after admitting to plagiarism. Twenty columns he wrote for an Indiana newspaper were determined to have material copied from other sources without attribution.

Timothy Goeglein, who has worked for Bush since 2001, acknowledged that he lifted material from a Dartmouth College publication and presented it as his own work in a column about education for The News-Sentinel in Fort Wayne, Ind.

The White House said Goeglein has apologized for not upholding the standards expected by the president. A White House statement says the president was disappointed to learn of the matter and was saddened for Goeglein and his family. It said Bush has long appreciated his service and knows him to be a good person who is committed to his country.
Posted by kmmcshea@gmail.com at 4:18 PM