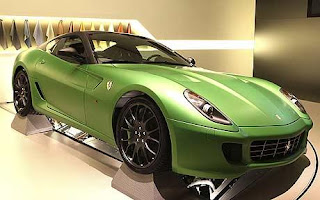 This Kermit-green Ferrari 599 hybrid is one of the stars of the show and a sure sign that even supercar makers are beginning to address their environmental impact.

That electrical energy is converted into about 650 volts, which gives an additional 100 horsepower that is used to supplement the acceleration of the six-litre V12 petrol engine and also run the engine's air conditioning and power-steering pumps.

While the HY-KERS is strictly an experimental vehicle at present, Favaretto Fabrizio, a Ferrari engineer says that it is capable of improving the 15.8mpg fuel consumption and reducing the 415g/km carbon dioxide emissions by up to a third in each case.

It would also be very expensive at present, almost doubling the £207,075 list price of the 205mph 599 GTB Fiorano, although Ferrari aims to have the 220lb system in production within five years at a far more affordable price and a lighter weight.

Trouble is, the KERS system has been dropped from Formula One this season as it was deemed too expensive, troublesome and not effective enough. Ferrari says that the F1 authorities will be reviewing the role of KERS in future seasons and that it is just recovering its development costs by fitting it to the road car........................