Fox News presents year-old Palin footage as new Palin book tour crowd. As Think Progress first noted, on the November 18 edition of Happening Now, guest co-host Gregg Jarrett used old footage -- which he said was "just coming in to us" -- of a McCain-Palin rally from last year to illustrate how Sarah Palin is "continuing to draw huge crowds" during her book tour. The following day, Skinner apologized for "mistakenly" airing the fake crowd video.

Stewart blasts Hannity for using old video footage to inflate Bachmann rally attendance. During the November 10 edition of Comedy Central's The Daily Show with Jon Stewart, Stewart blasted Fox News host Sean Hannity for attempting to inflate the crowd size of Rep. Michele Bachmann's (R-MN) Fox News-fueled GOP rally against health care reform by using footage of the crowd at the better-attended 9-12 rally. On the November 11 edition of his program, Hannity said he "screwed up" and apologized for airing "incorrect video" of 9-12 protests while discussing the Bachmann rally.

Fox News' Garrett apologizes for fake HBO-Obama story -- which Fox News repeated days later. During the November 4 edition of America's Newsroom, guest co-host Martha MacCallum started the fake story that President Obama watched an HBO special about himself instead of the November 3 election returns. The fake story was then picked up by Rush Limbaugh, among others, who claimed that "[i]f a documentary could get anal poisoning, this one could." On the November 4 edition of Studio B with Shepard Smith, White House correspondent Major Garrett apologized for mishearing press secretary Robert Gibbs and passing on the erroneous information. Despite the Fox News correction, on the November 8 edition of Fox News Watch, Fox News' weekly media analysis program, host Jon Scott repeated the fake story, claiming that Obama was "watching the HBO documentary. ... Now, maybe that's the one thing that could pull him away from -- from election returns." 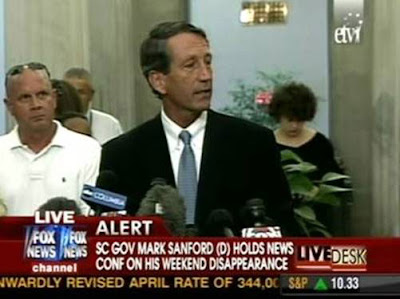 On Live Desk the next day, co-host Trace Gallagher made "a correction for something we put up on the screen during our coverage during the governor's press conference yesterday. We briefly identified Governor Sanford as a Democrat. He is, of course, a Republican. And we apologize for getting that wrong."

Fox News presents deceptively cropped 6-month-old Biden clip as new. On the March 16 edition of Live Desk, MacCallum claimed that "after weeks of economic doom and gloom, the Obama administration is now singing a slightly different tune. Take a look at what was said in recent interviews this weekend." Live Desk then aired clips of administration officials purportedly giving an optimistic view of the economy, which included video of Vice President Joe Biden stating, "The fundamentals of the economy are strong." However, Biden did not make those remarks during an "interview" that weekend; he made them at a September 2008 campaign event in which he criticized statements by Sen. John McCain. MacCallum apologized the next day, stating: "When we get something wrong, we admit it. We did so yesterday, and for that we apologize."

Fox News Watch's Scott claims "[w]e don't have any idea" what Biden said to AFL-CIO, but transcript was available. On March 9, Scott claimed on Fox News Watch that Biden's appearance at an AFL-CIO executive council meeting was "closed to the press," adding, "We don't have any idea what he said there." In fact, the White House released a transcript of Biden's AFL-CIO speech, and "a pool of print reporters" reportedly covered the speech at the request of the White House. On March 23, Scott said:

SCOTT: Before we go, last News Watch, we took Vice President Biden to task to giving speech to a labor organization that had been closed to the press. I mentioned that we, the media, had no idea what he said. Well, guess what? Turns out the vice president's office heard the howls of protest and did let a few print reporters hear those remarks. The office even put a transcript on the Web a day later. The veil of secrecy had been lifted, but we at News Watch weren't aware.

Sorry, Mr. Vice President, we do know what you said.

Fox passes off GOP press release as its own research -- typo and all. During the February 10 edition of Happening Now, Scott purported to "take a look back" at how the economic recovery plan "grew, and grew, and grew." In doing so, Scott referenced seven dates, as on-screen graphics cited various news sources from those time periods -- all of which came directly from a Senate Republican Communications Center press release. A Fox News on-screen graphic even reproduced a typo contained in the Republican press release.

The following day, Scott apologized -- for running the typo. Scott's apology was criticized by Washington Post media critic and CNN host Howard Kurtz, who said: "We sometimes jab at the pundits for using talking points, but in the case of Fox News anchor Jon Scott, it was literally true this week. ... You should be apologizing for using partisan propaganda from the GOP without telling your viewers where it came from. Talk about missing the point."