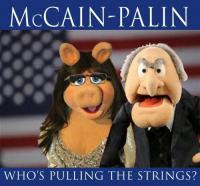 John McCain and Sarah Palin are both drowning in messes of their own making. He looks foolish for his grandstanding on the economy, the campaign "suspension" that never was and finally his failure to convince Republicans in the House to get behind the bailout compromise bill he inaccurately claimed credit for singlehandedly making possible. She is still trying to live down her profoundly embarrasing interviews with Katie Couric. Even as the smoke clears from their most recent segment, word has leaked that a yet to be aired portion shows Palin unable to name a single Supreme Court case besides Roe v. Wade.

So what does the McCain-Palin ticket do in response to this adversity? Why suggest that the media must be up to something! Check out this odd moment from the most recent Couric sit-down. This time Palin is joined by McCain who shows that Barack Obama is not the only politician he is shockingly condescending towards:

How on earth is a question asked by a completely sensible voter a "gotcha question?" Apparently now American voters are in the same boat as Maureen Dowd and numerous other "media elites" who shouldn't dare ask Palin about basic foreign policy. If you ask Palin a question you're apparently out to get her and her family too! This interview wasn't the only oddity of the day.

Sarah Palin's much anticipated vice presidential debate with Joe Biden is this Thursday and her interviews with Couric has raised serious questions about what kind of performance she will deliver. McCain aides have reportedly said Palin was a disaster in practice debates. And in an odd change of pace, instead of playing the usual expectations game--McCain surrogates seem to be preemptively criticizing the questions that Gwen Ifill may choose to ask.

Again with the "gotcha questions" claim! Even by Fox's standards, this is ridiculous. No one knows what Ifill will ask, we only know that she is a consummate pro who deserves more respect than this. Basically the GOP seems to be saying that if Palin bombs on Thursday it will be because the media wanted her to, not because she simply, obviously is wildly uninformed on national affairs. Hey, casting herself as a martyr for her during her debut speech at the RNC but I think it will backfire this time.

Here's why...I just saw Bill Maher on Conan O'Brien's show and he was asked about Palin and he made a point that I thought was very profound. What if Sarah Palin was president right now. As the Dow fell 800, what would a President Palin do? Would we feel remotely comfortable? It's a terrifying thought and I think the American people will have that in mind when they watch her this week--and if the polls are accurate they've endured one McCain maverick maneuver too many.