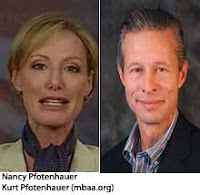 It looks there's another John McCain adviser with a personal background that doesn't exactly jibe with the candidate's recent effort to portray himself as a populist crusader for ordinary folks.

Last week in Green Bay, McCain declared: "At the center of the problem were the lobbyists, politicians, and bureaucrats who succeeded in persuading Congress and the administration to ignore the festering problems at Fannie Mae and Freddie Mac."

Of course, as Barack Obama has pointed out, McCain's campaign is a virtual who's who of former lobbyists for Fannie and Freddie.

But another McCain adviser has close personal ties to one of the industries that, like Fannie and Freddie, spent too long assuring the public that the housing market was in good health, and thereby forestalling efforts that might have protected homeowners and staved off a crisis.

Nancy Pfotenhauer, a senior economic adviser to McCain, has been all over the airwaves in recent days touting McCain's decision to "suspend" his campaign over the bailout. But her husband, Kurt Pfotenhauer, worked until late last year as the top lobbyist for the Mortgage Bankers Association, a trade group that in recent years downplayed fears of a housing bubble, only to be proved spectacularly wrong.

When MBA released a report in 2005 on the state of the housing market, its chief economist told reporters: "There are risks but they're far less dramatic than the hyperbole of recent months." An MBA vice president added: "We're trying to dismiss the overheated rhetoric on bubbles." Part of the purpose of the ho-hum rhetoric, it would appear, was to discourage government regulators from looking more closely at the problems in the market, and ultimately taking action to protect homeowners. And many experts blame that regulatory inaction in the housing market for the current financial crisis now shaking the country.

Since January, Kurt Pfotenhauer, who did not immeduately respond to a detailed request for comment, has served as the CEO of the American Land Title Association, a trade association representing the title insurance industry. But during the current crisis, his old employer, MBA, has been at the center of lobbying efforts -- successful it appears -- to oppose a provision, sought by Democrats, that would allow bankruptcy judges to modify mortgages on primary residents. The lending industry has long fought such measures, arguing that it would force lenders to increase mortgage rates. In a statement issued yesterday, the MBA asserted that the provision "would throw into question the value of the collateral that backs every mortgage made in this country -- the home." According to one Democratic lobbyist, MBA's current top lobbyist, Francis Creighton, has lately been "living in the halls" of Congress in an effort to influence lawmakers on the bill.

Allies of Kurt Pfotenhauer have lately been willing to tout his ties to the McCain campaign, through his wife, to bolster his professional credentials. An advanced notice of a speech Kurt was to give last week to the Indiana Land Title Association (ITLA), an ALTA affiliate, published in an Indiana newspaper and seemingly written by the ITLA, noted that he would "provide a public policy update from the nation's capital, with an emphasis on the housing and mortgage finance crisis." It added: "His wife, Nancy, is a senior advisor and national spokesperson for presidential candidate John McCain."

Of course, there's no reason why Nancy Pfotenhauer's career should be limited by her husband's lobbying work. But at the very least, Kurt Pfotenhauer's recent role as an advocate for banking interests that discouraged regulators from paying closer attention to the problems in the housing market raises questions about the backgrounds of the advisers John McCain surrounds himself with -- especially in light of the recent populist turn of his campaign rhetoric.