Fighting between Iraqi security forces and Shia militants has spread from Basra to other Shia parts of the country including Baghdad's Sadr City.

At least 30 people have been killed since Iraqi Prime Minister Nouri Maliki vowed on a visit to the southern oil city to "re-impose law".

Unrest in Basra has been stoked by a variety of militias and criminal gangs.

But the government's unspoken intent is to stop it falling under the sway of the Mehdi Army, a BBC analyst says.

Its leader, the radical young cleric Moqtada Sadr, has called on his followers to start a campaign of civil disobedience across the country.

Three Iraqi army brigades have been sent from Baghdad to Basra and up to 15,000 troops could be involved.

Some of the fiercest fighting in the operation dubbed Charge of the Knights has focused on Mehdi Army strongholds.

Police curfews have been imposed in Basra, Kut, Samawa, Nasiriyah, Hilla and Diwaniyah.

Columns of smoke hung across Basra and coalition jets prowled the skies on Tuesday.

Security forces kept journalists away from areas where heavy fighting appeared to be under way and correspondents say it was unclear by nightfall who had the upper hand.

Col Karim al-Zaidi, a spokesman for the Iraq military, was quoted by The Associated Press as saying security forces had met stiff resistance from Mehdi Army gunmen in the city centre.

Reuters Television pictures showed gunmen firing mortars in the street while others, the agency said, drove around in captured Iraqi army and police vehicles.

In Baghdad, rockets hit the Green Zone but there were no immediate reports of casualties.

US and Iraqi troops sealed off Baghdad's Sadr City as fighting raged inside.

The Basra operation is being personally led by Mr Maliki, a fact hailed by Washington.

"Prime Minister Maliki made a brave decision to go into a very difficult situation where you have terrorists and insurgents that have infested the area, and he's taken his forces down there and are working with them," said White House spokeswoman Dana Perino.

Sadrists are convinced it is an attempt to weaken them ahead of provincial elections due in October - elections they are confident will strengthen their grip on the south.

Mr Maliki has embarked on a highly risky strategy, our analyst notes.

For one thing, it is far from clear that it will succeed.

The Sadrist movement enjoys widespread support, especially among the young and the poor, and is well entrenched in Basra and many other predominantly Shia towns and cities in the south.

For another, if the ceasefire which the Sadrists have largely followed since last summer were to collapse, that would seriously undermine claims by the government - and by the Bush administration in Washington - that Iraq had somehow turned a corner and was moving from civil war to political reconciliation. 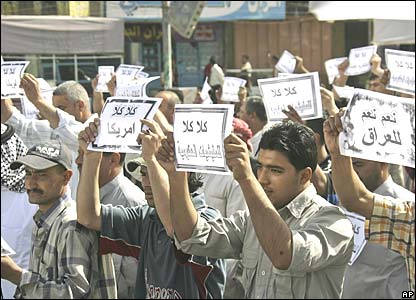 ... and in Amil, Baghdad, where they held signs reading "No to America, yes to Iraq".